In the Investors Intelligence survey of newsletter writers and investment advisors, the bulls are back to outnumbering the bears once again as fears of a further bear market are abating quickly. This week’s chart shows just the percentage categorized as bears, and it is plotted on an inverted scale in order to correlate better to the price action. Bears this week are down (up in the chart) to 27.8% versus 30.1% last week, and 44.1% at the extreme point in late June 2022. Bulls (not shown) are at 44.4%.

The S&P 500 is bonking against resistance at the 4100-4200 level, which marked previous support and resistance in the past. But the bearish percentage is already looking much better now than at the equivalent points. In other words, sentiment is rebounding more than merited by just what prices have done.

This point about prices driving sentiment is one I have written about before (see the linked articles below). In fact, you can see it in this next chart, which compares the Investors Intelligence Bull-Bear Spread to a detrended plot of prices. 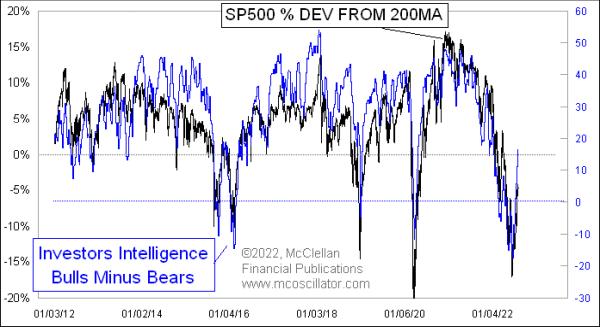 To take out the long-term uptrend in prices, I have plotted the S&P 500 as a percentage deviation from its own 200-day simple moving average. To get the two plots to align with the best fit, I had to play with the scaling for each plot, resulting in an interesting revelation. Note that the two zero lines for the two different y-axes are offset from each other. That is a graphical way of pointing out that the Investors Intelligence data carry a bullish bias.

That is not necessarily a bad thing. In the long run, the stock market trends higher, and so analysts who are not permabears should be biased to the bullish side. And it turns out that it is about 15 percentage points of bullish bias, according to the plot, fit in this chart.

The next chart shows the same comparison, just zoomed in closer on the most recent data: 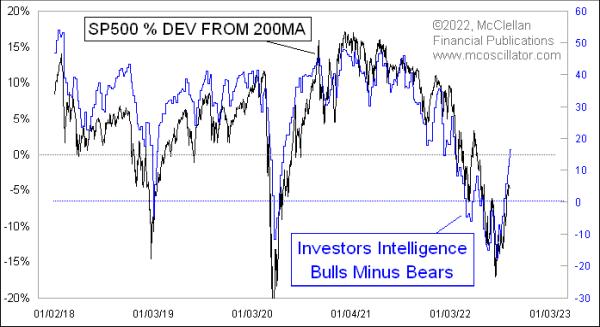 This zoomed-in look allows us to see that the blue line for the Bull-Bear Spread is up well above the detrended S&P 500 plot. In other words, sentiment has rebounded more than what the price bounce would suggest is merited.

The Bull-Bear Spread also rebounded faster than prices after the COVID Crash low, and after the 2018 selloff. So this sentiment change might just be a normal reaction to the start of a new bull market. Or it might instead be an overreaction in terms of analyst sentiment which is not merited, leaving “the crowd” subject to a shocking reversal of fortunes if prices fail to follow through.

We saw an example of that latter principle back in early 2009: 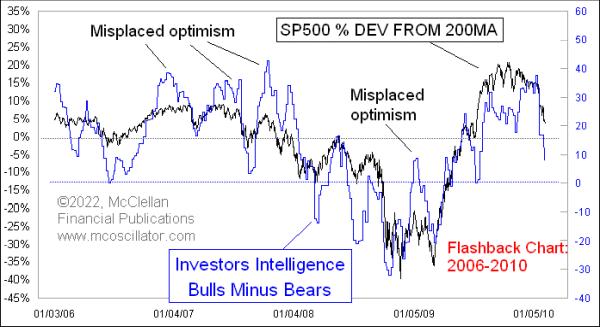 Analysts as a group thought that October 2008 was the washout low, and they started getting optimistic too early. In their defense, it was really ugly in September and October 2008, with Lehman Brothers going down. That arguably should have been enough to put in a bear market bottom. But then after a failing bounce, stocks rolled over and headed down to an even lower price low in March 2009. The Investors Intelligence Bull-Bear Spread got all the way back to a positive spread in January 2009, which was more optimism than was supported by the magnitude of what prices were doing, and that excessive optimism had to get unwound into the March 2009 final price low. So a similar scenario could very well unfold this time.

Subscribe to Top Advisors Corner to be notified whenever a new post is added to this blog!

Need a 2nd Income? 3 Stocks (With Monthly Dividends) to Buy and Hold