Can The Stock Market Overcome This MAJOR Issue? | Trading Places with Tom Bowley

I’m a believer that Wall Street will eventually overcome all obstacles and move back to all-time highs. It’s a big “wall of worry”, but the bulls are up to the task. The cyclical bear market is over. We’ve resumed the secular bull market that began on April 10, 2013 when the S&P 500 finally cleared highs from years 2000 and 2007:

So the big argument between bears and bulls currently is whether what I believe was a cyclical bear market morphs into something similar to the 2000s when we traded for more than 13 years without setting a new all-time high. Everyone is free to pick their side. One group will be right and one will be wrong. I’ll take my chances on the long side.

Hey, I get it. I realize that inflation hit its highest level in more than 40 years. The 1970s was a very rough decade, so no one wants to live through that again. Yes, the Fed has been very hawkish and continues to talk tough. No one wants to fight the Fed, right? We’ve just seen a second straight quarter of negative GDP. Who wants to buy stocks in the midst of a recession? We’ve got the ongoing war in Ukraine. Who wants to buy stocks in the face of geopolitical tensions?

My answer to all of this is…….do you think this is news that Wall Street is unaware of? Trust me, they’ve got Harvard Economics MBAs on staff. They likely understand all of this MUCH better than you, me, and everyone else trying to figure all of this out. Rather than try to outsmart these brilliant folks on Wall Street, I simply follow their money. That’s where StockCharts.com and the charts come into play. Technical analysis isn’t easy and those who apply it use different strategies, indicators, tools, and yes they have their own personal biases. I will happily tell you that I have a bullish bias ALWAYS. I’ve said before that if I see warning signs and enough of them emerge, I’ll try my best to objectively point them out and discuss them. I did that at the end of 2021 and continued to do that through the first 5 months of 2022. But once I see money rotate away from value and back into growth as the S&P 500 sets a new low, I begin to question all of the media rhetoric. When I see the options traders all turning bearish simultaneously, I realize that sentiment has shifted dramatically – which is EXACTLY what we needed and what I called for at the end of 2021.

The news right now is honestly just as bad as it was last year, probably worse in several areas. But THAT is why the S&P 500 dropped 25%, the 6th worst cyclical bear market in the last 72 years! The stock market prices in bad news. Once sentiment turns bearish, market participants, collectively, cannot process how the stock market can go higher when the news is so bad. After studying bear market behavior, rotational shifts, sentiment, etc, for years and years, I realize the disconnect and accept it. I also do my best to profit from it – just like Wall Street is doing.

Personally, I believe all the bad news we’re hearing right now was fully priced in at the June low. That’s when Wall Street decided it was time to buy growth stocks – exactly when the stock market was at its most panicked level! It was that bullish rotation and increased panic that suggested I call the bottom on June 16th. For me, it’s not about being right or wrong, it’s about managing risk. If Wall Street, and all of its MBAs, decided it was time to start buying growth stocks hand over fist, that’s good enough for me. I said at the time that the risk of remaining in cash or shorting was much too great based upon this new market development – rotation into “risk on” areas while selling was exhausting itself.

Now For My Bearish Thoughts

August options expire next Friday. Have you looked at the major index ETFs like the SPY and QQQ? The number of in-the-money calls are SWAMPING the number of in-the-money puts. No matter how much I believe a bottom is in, I will not overlook the financial incentive for market makers to manipulate prices next week. I remember when everyone was talking about the bear market rally in March. First, here’s how the QQQ and SPY looked at the close on March 14th, just four days before March options expired: 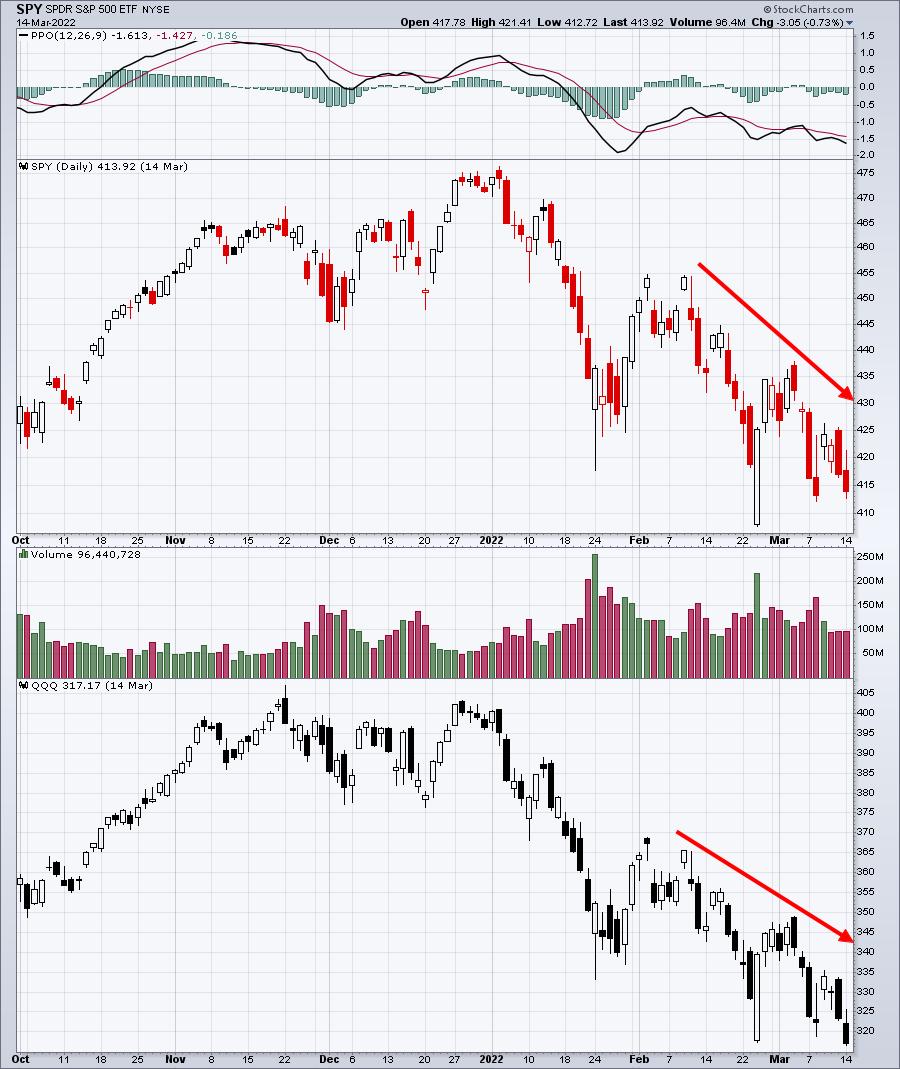 The very next day, we held our March Max Pain event with members and I showed them this Excel spreadsheet:

From left to right, the 423.02 was the Tuesday, March 15th close, the 443.79 was the “max pain” level for the SPY (point at which in-the-money calls equals in-the-money puts), the POTENTIAL gain if prices gravitate all the way to max pain, and the amount of NET in-the-money put premium on the SPY as of the March 15th close. So between the SPY and QQQ, there was nearly $3.4 BILLION of net in-the-money put premium. If prices would rise from that Tuesday close through Friday, market makers would be in a position for a WINDFALL of profits. So was this rally that began on March 15th simply a bear market rally or was the financial incentive from options the reason that we saw such a big rally? Here’s what happened the balance of that week: 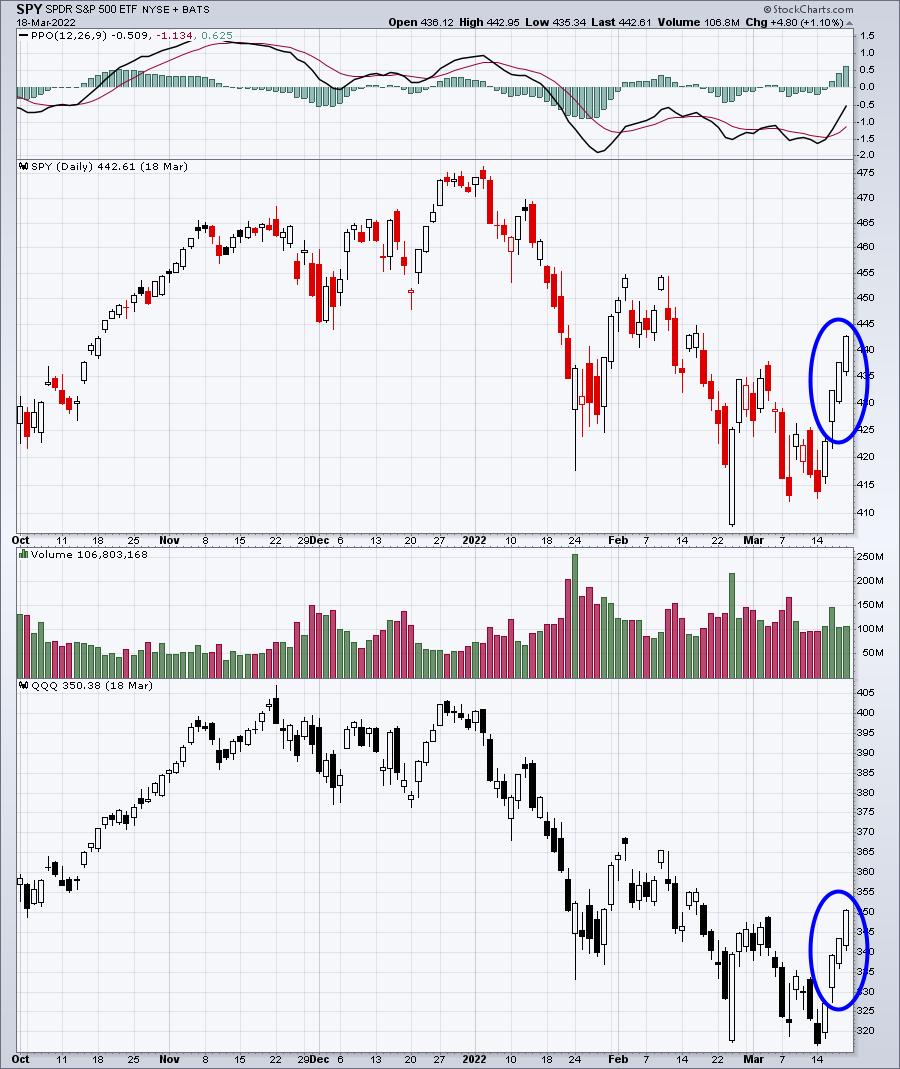 Call it a bear market rally if you’d like. I’ll call it Wall Street ONCE AGAIN stealing (legally) from unsuspecting options traders. It’s the way the market was designed….and works. Bet against it at your own risk.

So why do I bring up March, options, max pain, and that huge reversal? Well, because, as Yogi Berra would likely say, it’s “deja vu all over again”! Except there’s one big difference this time. Instead of a massive decline heading into options expiration week, we’ve seen the opposite: 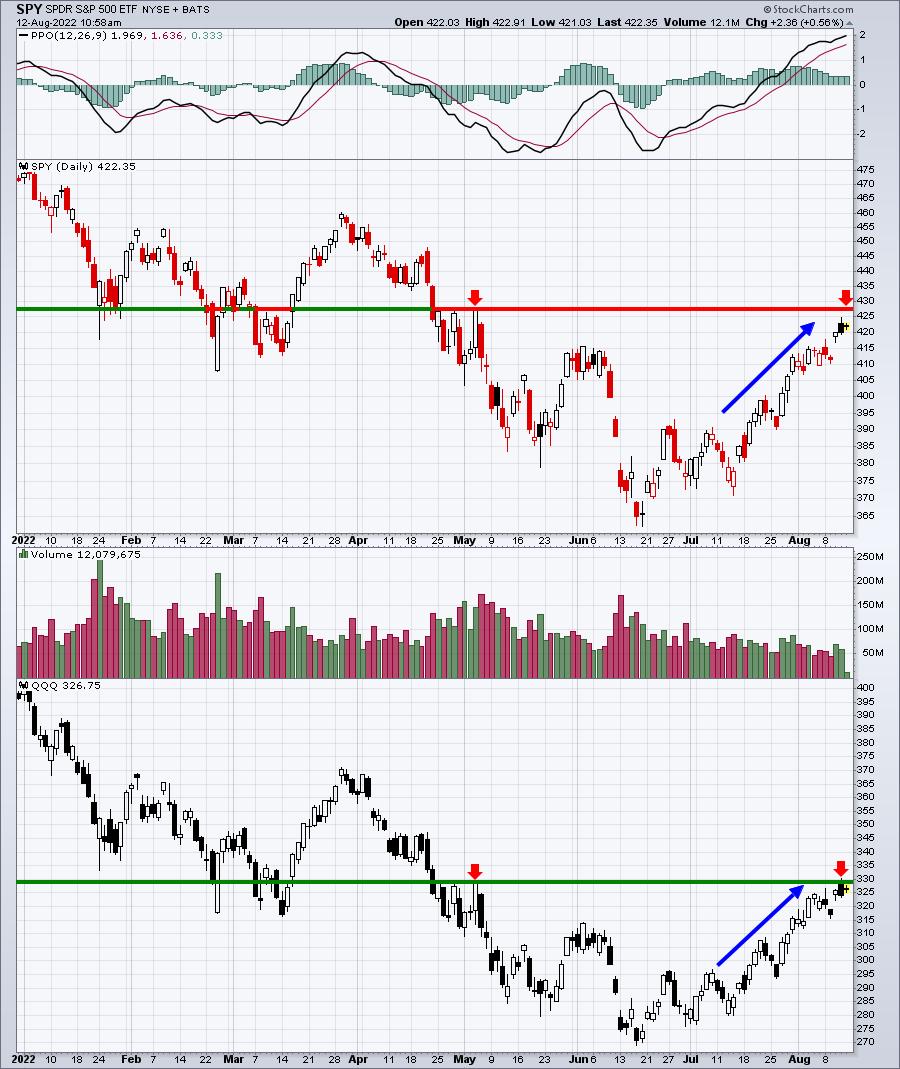 We’ve been trading straight up over the past 4-6 weeks and there is a MASSIVE imbalance between in-the-money calls and in-the-money puts. I haven’t calculated the amount of net in-the-money calls, but I can tell you that it’s substantial. This time, there will be financial incentive for market makers to manipulate prices LOWER between now and next Friday. It’s important to understand one thing, however. Market makers likely hedge their options positions. When the market is going straight up, as traders buy calls, I would be shocked if market makers didn’t take covered call positions – selling the calls to traders, while buying the underlying stock. That protects market makers if prices keep going higher. So don’t worry about them, they’ll be fine, trust me. But, in this scenario, what if market makers sell their underlying stock at some point for profit, use their capital to take short-term short positions to artificially (temporarily) drive prices lower into options expiration, making money on those short positions? Oh, and by the way, by driving those prices lower temporarily by shorting, guess what happens to all that in-the-money call premium? Yep, it disintegrates into thin air while options traders are left holding the empty bag. It’s a WIN-WIN-WIN for market makers. You don’t think these big Wall Street firms would do this? Let me tell you something – they’d sell a family member for a buck.

It’s very possible we’ll get that selloff that so many bears are looking for right now. Unfortunately for them, it won’t be the start of another leg lower. It’ll be temporary, encourage them to dig their heels in deeper, then the carpet will get pulled once again.

Let’s see how this plays out.

On Saturday, August 27, 2022, at 10am ET, I’ll be hosting a VERY important event, “Where Does The Market Go From Here?”. It’s a FREE event open to everyone, but you will need to register for this event to save your seat. CLICK HERE for more information and to register with your name and email address.