The S&P 500 Retreats Toward Bear Territory

by admin
in Stocks & Capital News

Extraordinary things are afoot for the S&P 500 (Index: SPX). After recovering from the Eurozone geopolitics noise event last week, the index plunged on 13 September 2022 as investors reacted to the news that inflation in the U.S. is running much hotter than expected. By the end of the trading week, the S&P 500 retreated to 3,873.33, some 19.2% below its 3 January 2022 all-time record high and just 0.8% away from the 20% decline threshold that defines a bear market.

Investors reacted that way because the high inflation means the Federal Reserve will keep hiking rates until a hard landing in the form of a recession is inevitable. The CME Group’s FedWatch Tool projects a three-quarter point rate hike next week (2022-Q3), which investors are now betting will be followed by another three-quarter point hike in November (2022-Q4). The tool then projects the pace of rate hikes may slow a bit, with a quarter-point rate hike in December (2022-Q4) to close out 2022 in the target range of 4.00-4.25%. In 2023, the FedWatch tool anticipates quarter-point rate hikes in both February and March (2023-Q1) to reach a target range of 4.50-4.75% before potentially reversing in either May or June (2023-Q2) in response to building recessionary conditions.

The latest update to the alternative futures chart captures the plunge in stock prices, which have fallen below the levels associated with the dividend futures-based model‘s projected trajectories associated with how far investors are looking into the future and their expectations for dividend growth at those times. 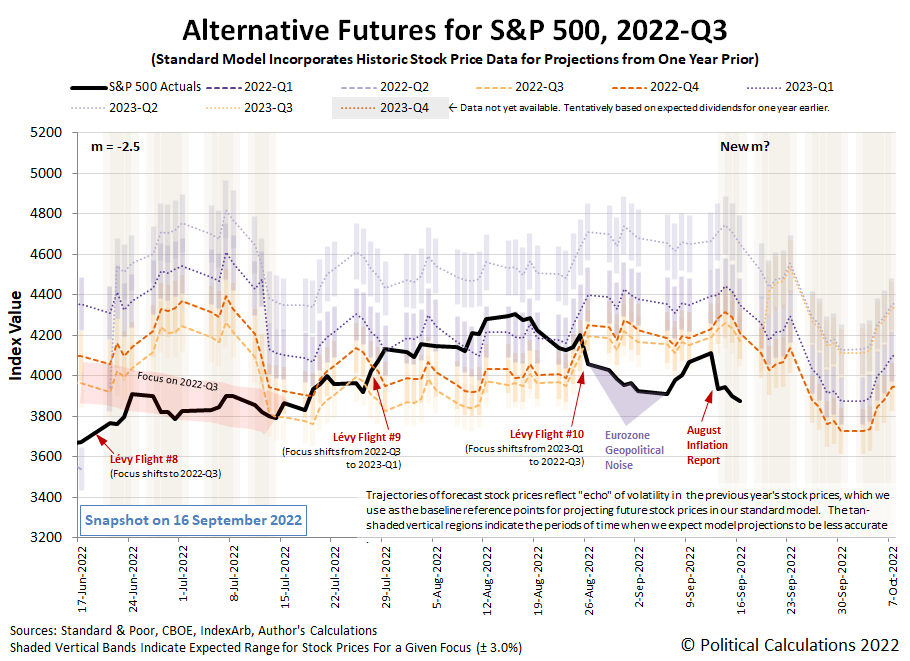 As this is being written, it’s still too early to make a firm determination, but here are the possibilities for what that development means:

The early evidence is supporting the second option, if we also assume investors shifted their forward-looking focus toward 2023-Q2 in setting current day stock prices, which is to say the inflation report prompted another Lévy flight event this year. If so, the value of m changed from the -2.5 it has been since 16 June 2021 to instead be around +2.0 as of 13 September 2022. The next chart shows how the model’s projections would change under that scenario: 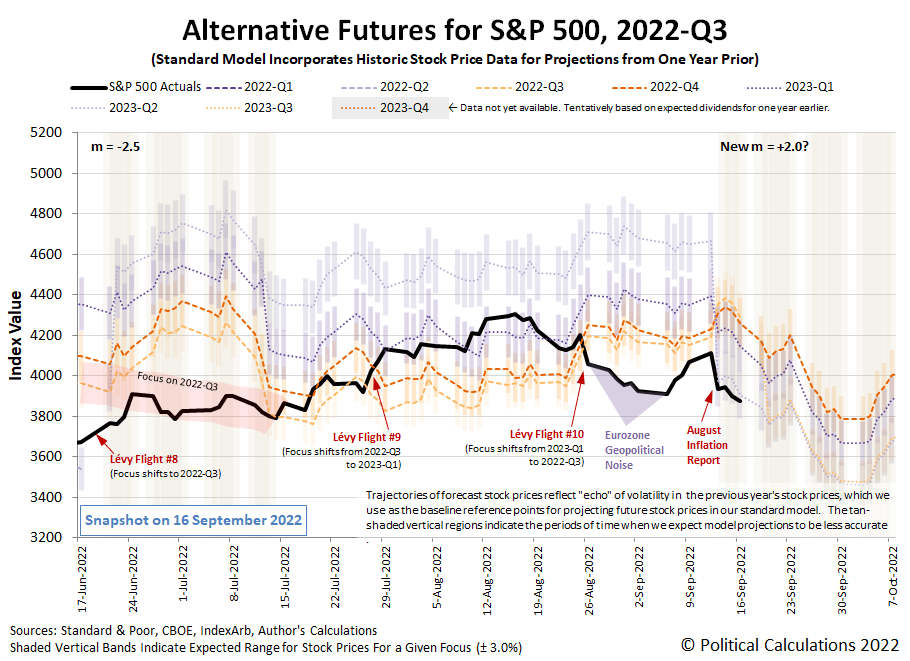 The week’s market-moving headlines and the FedWatch tool’s projections provide evidence in support of such a new Lévy flight event, in which investors would be looking out to 2023-Q2 as the likely timing in which the Fed’s current series of rate hikes reach their terminal peak before the Fed is forced to reverse and begin cutting rates because of building recessionary pressures. It may however be some weeks before we have a clear answer as to which scenario we’ve described applies or if something else altogether is at work. Unofficially, we’re hoping the scenario we described is wrong and the first scenario is the right one.

But that’s all part of what makes tracking the S&P 500 such chaotic fun! Here’s the past week’s market moving headlines:

The Atlanta Fed’s GDPNow tool‘s forecast for real GDP growth in 2022-Q3 plunged for the second consecutive week, from 1.3% to 0.5%. The Bureau of Economic Analysis will provide its first official estimate of real GDP growth for the U.S. economy in 2022-Q3 on 27 October 2022.

Editor’s Note: The summary bullets for this article were chosen by Seeking Alpha editors.