Despite the bear market environment, a handful of stock-based ETFs were showing leadership with bullish Trend Composite signals. Representatives from dirty energy (XLE), clean energy (TAN) and utilities (XLU) were covered over the last few weeks and this article is a follow-up. These ETFs remain with bullish Trend Composite signals, but they succumbed to broad market selling pressure as correlations continue to rise and the bear extends its grip. Leading stock-based ETFs are still part of the stock market and vulnerable to the bear.

The first chart shows the Energy SPDR (XLE), which was featured on September 9th. The Trend Composite turned bullish on July 29th and the ETF extended higher after this signal, even holding up as SPY reversed in the second half of August. XLE could not escape the gravitational pull of the bear market over the last eight days and fell sharply. Even though the Trend Composite is still bullish and XLE remains above the ATR Trailing Stop, it looks like a lower high formed from June to September (~61.8% retracement) and the ETF broke wedge support to signal a continuation of the June-July decline. 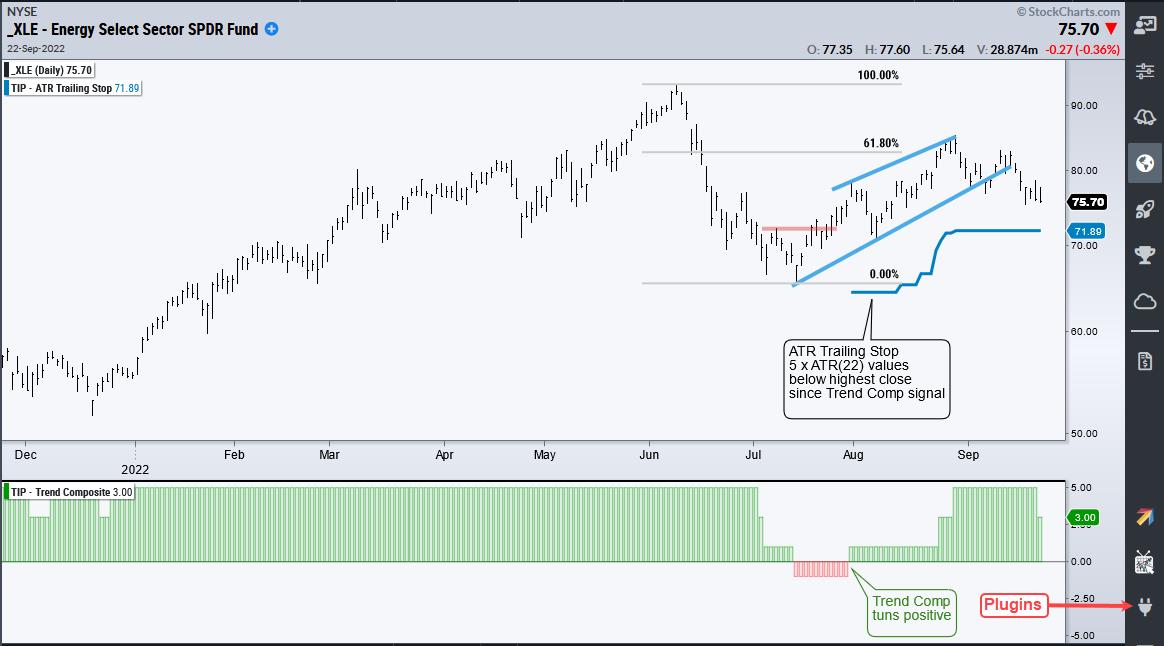 The next chart shows the Solar Energy ETF (TAN), which was featured on August 1st with a breakout. The Trend Composite turned positive just before this breakout and I set the intial ATR Trailing Stop near the June-July lows. TAN was holding up well two weeks ago, but fell sharply with the rest of the market and is nearing the ATR Trailing Stop. Whether bull or bear market, traders need to plan their trade and then trade that plan. 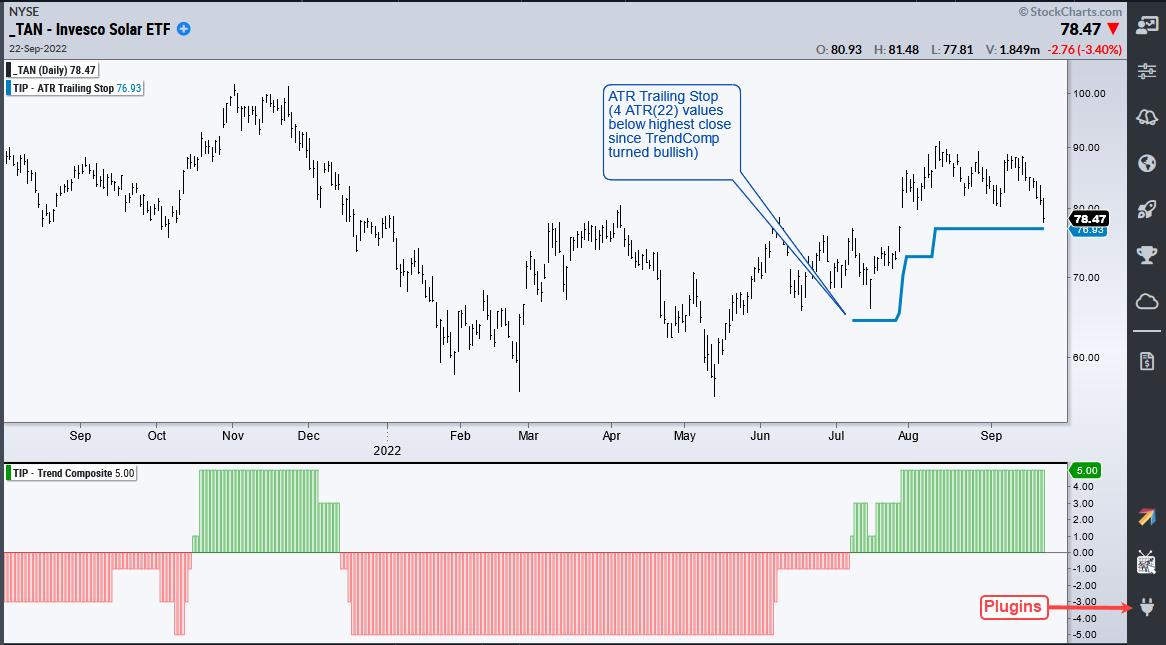 The final chart shows the Utilities SPDR (XLU) with some massive swings this year (+20%, -16%, +21%, -7%). The Trend Composite remains positive, but the swings are causing whipsaw signals. XLU is currently testing its ATR Trailing Stop (blue line), which was initially set to align with the July low. Note that my article on September 2nd showed that so-called defensive sectors are not immune to the bear. Typically, they just decline less. 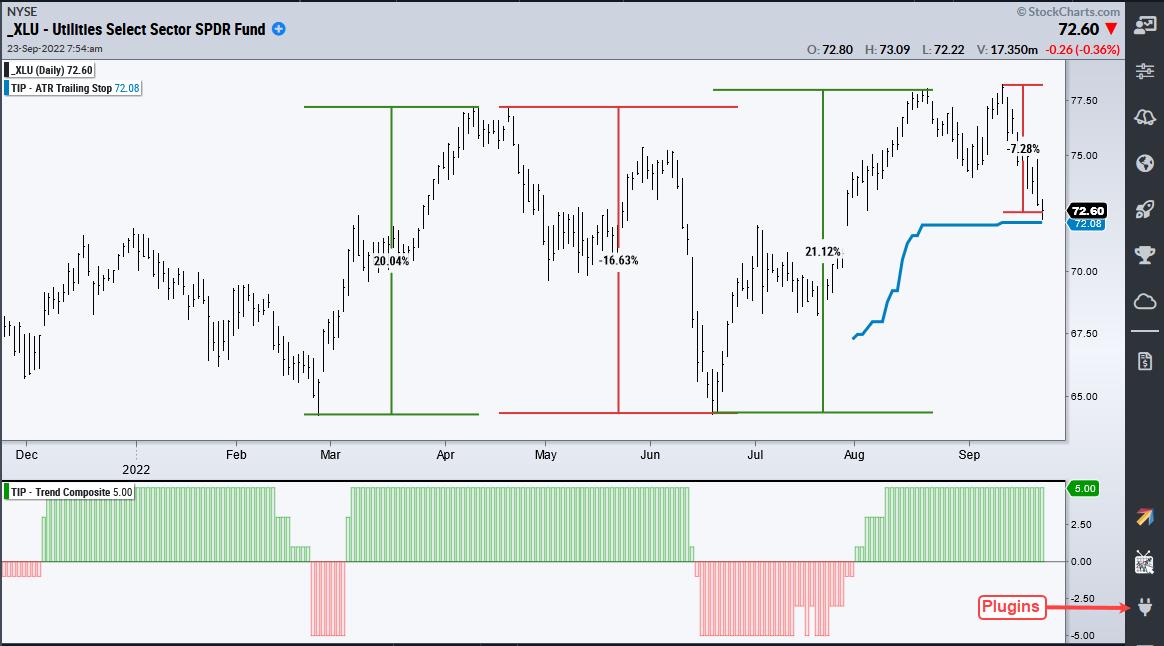 Richard Russell of Dow Theory Letters (RIP) used do say that the winner in a bear market is the one who loses the least. TAN, XLE and XLU are holding up better than SPY year-to-date and over the last two months, but they are not immune to the bear as correlations rise. A bear market environment increases risk for all stock-related ETFs and the chance of picking winners is greatly reduced.

TrendInvestoPro remains very selective when it comes to stock-based ETFs because the Composite Breadth Model has been bearish since April 11th and the vast majority of ETFs are in downtrends. Our fucus is on non-stock ETFs, but even the pickings here are slim. Click here for immediate access to our reports, weekly video and ETF strategy.

StochClose, the Trend Composite, ATR Trailing Stop and eight other indicators are part of the TIP Indicator Edge Plugin for StockCharts ACP. Click here to learn more and take your analysis process to the next level.

Why Suncor Energy Stock Could Lose its Underperformer Tag Soon

Can The Stock Market Overcome This MAJOR Issue? | Trading Places with Tom Bowley