SPY Remains Under Pressure But These Sectors Are Improving. | RRG Charts

Relative Strength Is Losing Its Concentration

Recent sector rotation shows a relative strength loss for two of the three defensive sectors. This is a move away from the trend we have seen for many months, where the defensive sectors were leading the market, sometimes even when the S&P 500 was moving up. So the first takeaway from this observation is that the dominance of defensive sectors seems to be fading away, at least for now.

The most eye-catching deviation is the almost straight line on the tail for XLU pushing the sector deeper into the lagging quadrant.

On the opposite side, the cyclical sectors also show a diverse image. Materials and Financials are at strong rotations and inside the leading quadrant, while Real Estate and, more importantly, Consumer Discretionary are inside the lagging quadrant.

And also, in the group of sensitive sectors, we find 2-2 opposing rotations. Energy and Industrials are inside, leading and pushing further into it as they advance on both scales. Communication Services remains weak and continues to lose on both scales. Technology has curled upward and is picking up some relative momentum but no relative strength yet.

All in all, it looks as if the dominance of the defensive group is fading, but on the other hand, none of the other groups is picking up that role. This means that relative strength in the market is currently scattered across all sectors, making it hard to use any concentration of leadership as a guide for the direction of the S&P 500.

With that in mind, I still see an overhead supply for SPY. 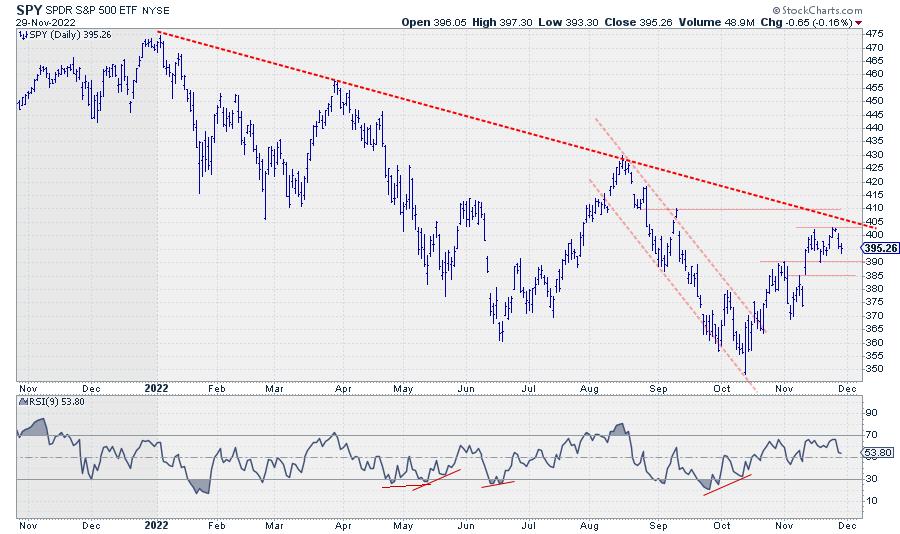 First, the major falling resistance has been running over the highs since the start of the year. Secondly, the resistance zone between 410-415 came into play a few times as support and resistance. And then there seems to be a small double-top building around 403 where the two most recent peaks were formed. 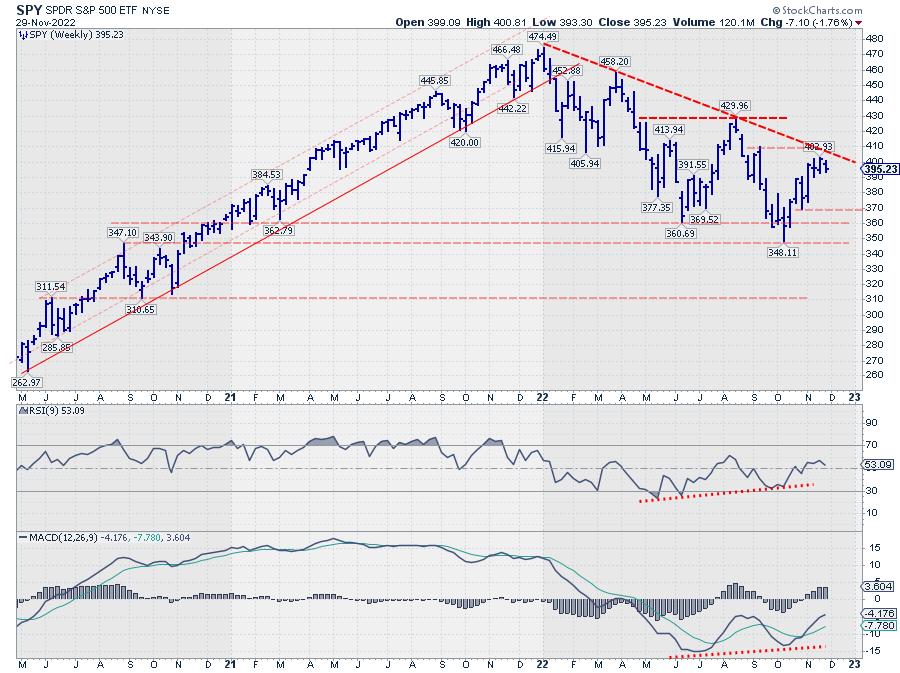 All of that is happening while the bigger trend is still down, with a clear series of lower highs and lower lows visible on the weekly chart.

Some Individual Sectors Are Improving

Now, with that bigger framework in place, we can check out a few sectors that are in the process of setting up for a positive turnaround. The sectors that I am particularly watching are Materials (XLB), Financials (XLF), Industrials (XLI), and Consumer Staples (XLP). 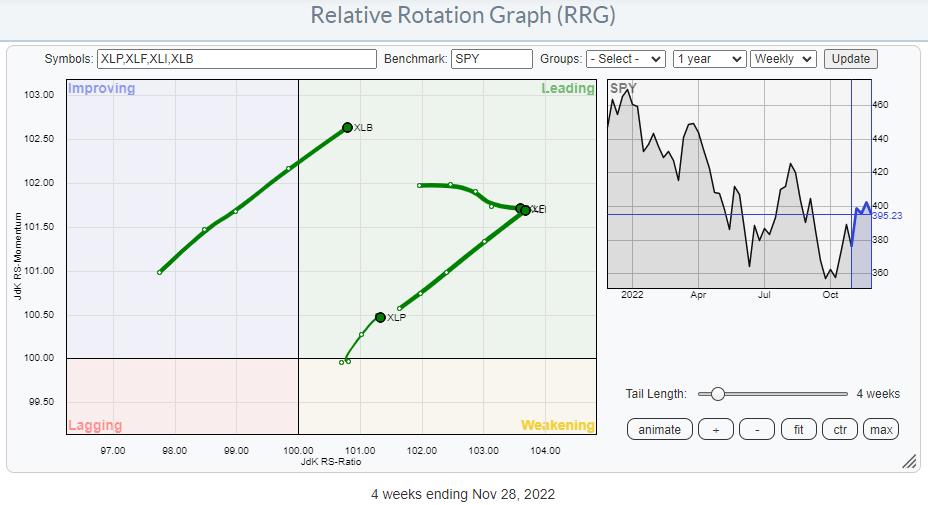 Above are these four sectors plotted on a weekly Relative Rotation Graph. Except for XLF, they are all at a strong RRG-Heading between 0-90 degrees. XLF is moving due East and continues to gain in terms of relative strength at a steady pace (relative momentum). 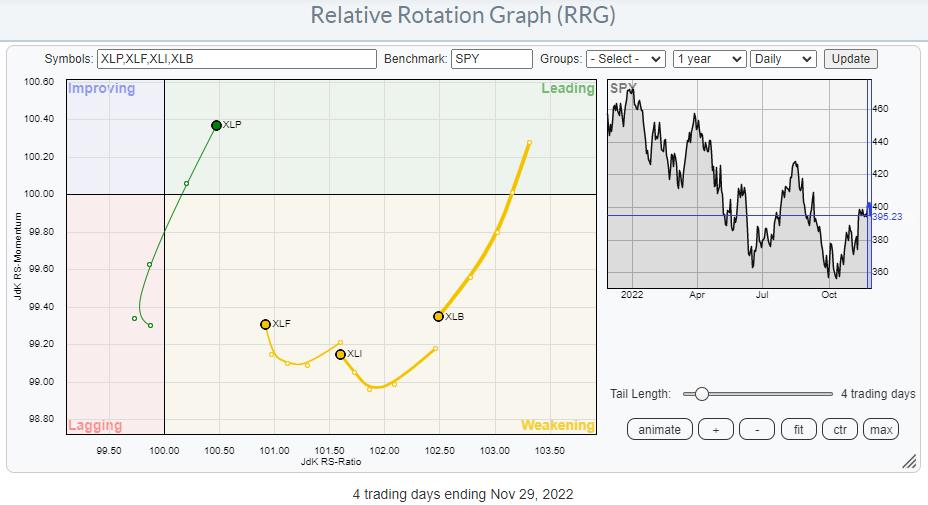 Switching to the daily version of this chart shows a strong rotation for XLP moving back into the leading quadrant after a corrective rotation through weakening and briefly lagging.

XLB, XLI, and XLF are all inside the weakening quadrant well above the 100-level on the RS-Ratio scale. XLF and XLI have already started turning back up, while XLB seems to need a bit more corrective relative rotation. 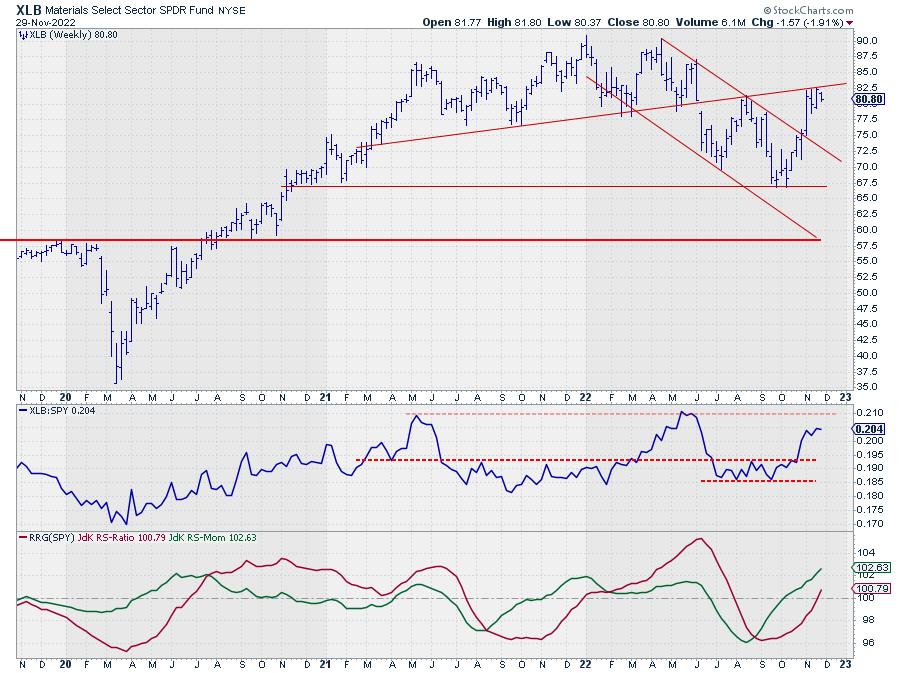 XLB is pushing against that slightly up-sloping resistance for a few weeks already but has not been able to create a decisive breakthrough. In terms of relative strength, this sector already broke horizontal resistance a few weeks ago, while the next (relative) resistance is still a bit higher. This creates room for a corrective relative move in XLB when the price fails to break higher. This is likely the sector facing the most resistance of these four. 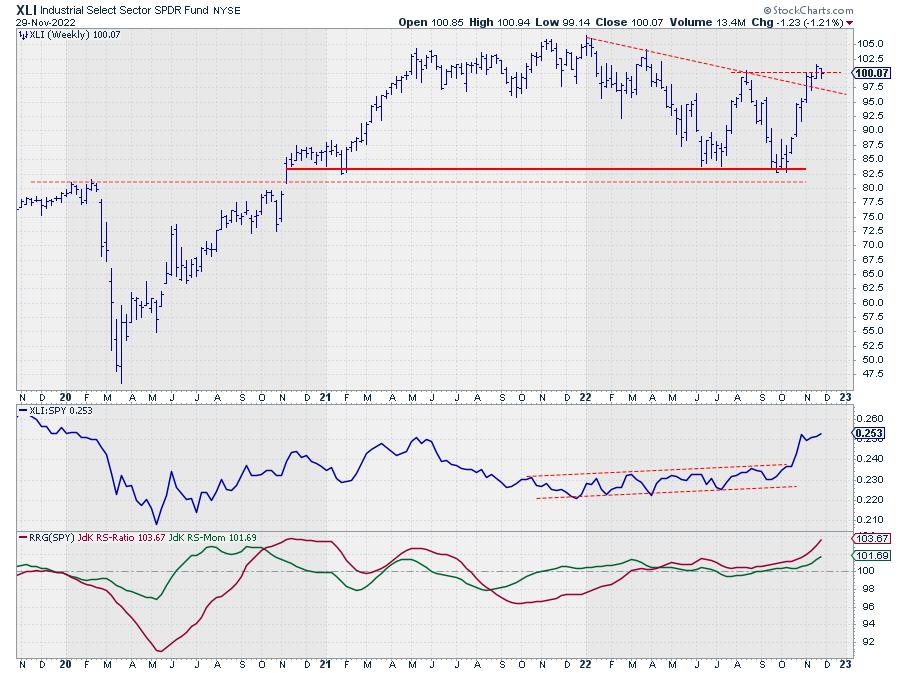 Industrials have already broken the down-sloping resistance and is now pushing against resistance in the area around the previous peak at 100.50. Yesterday’s high was at 101.30, but no real follow-through yet.

Relative strength continues to pick up momentum, resulting in one of the stronger rotations on the RRG. I am looking for a decisive break above 101.50 on this week’s close. That will very likely attract more buying interest to push the sector further up toward the 105 area, where it will face the real test. 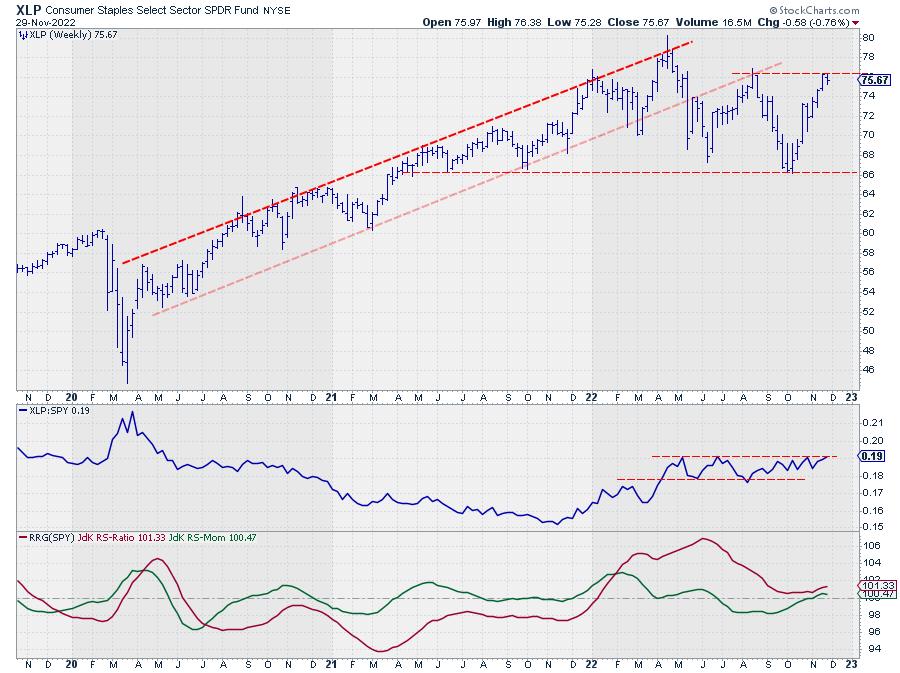 XLP found support near 66 and rallied strongly towards the 76 area, which is now running into resistance coming off the previous peak (mid-August). Relative Strength has also followed the price rally up to its resistance level.

We need a break above 76 by the end of the week to trigger new upside potential toward the peak that was set near 80 earlier this year. A decent tradable opportunity, when triggered with good downside protection once old resistance can start to act as support and a real good entry for an expected rally if and when XLP can take out its all-time high. 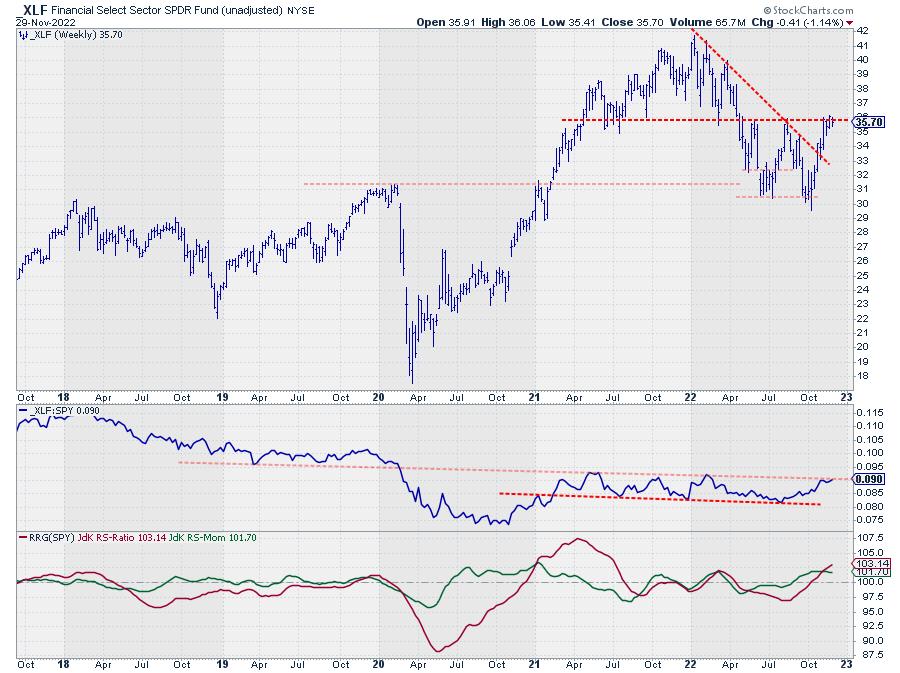 The setup for XLF is quite similar to the other three sectors I discussed above. However;

The upside potential from the breakout to the previous high seems to be the biggest which makes it, IMHO, the most interesting opportunity to watch once it triggers.

TFSA Investors: 2 Dividend-Paying Mortgage Stocks to Boost Your Income in 2023