Mish’s Daily: How to Trade a Golden Cross in a Bear Market | Mish’s Market Minute

Investors will watch closely tomorrow, as the Consumer Price Index (CPI) print is released, and Wednesday, when the Fed announces its latest rate hike. The expectation is for CPI to be lower and for the Fed to raise interest rates a half-percentage point.

The Dow Jones Industrial Average (represented above by DIA) formed a technical “golden cross” today. This formation occurs when the 50-day moving average (represented by the blue line) shoots above its 200-day moving average (represented by the green line). The golden cross technical formation often precedes a rally in stock or, in this case, an index. It is only one indicator of improving potential market prices. It is not foolproof or guaranteed to yield immediate results, but, when used in conjunction with other indicators and analysis, can be helpful, especially during a bear market. Our proprietary Real Motion Indicator above shows that DIA’s upward momentum is in line with the positive price action. In other words, we could see further price increases. DIA is showing positive market dominance in our Triple Play Leadership Indicator. That is to say, DIA is showing real strength in a good breakout and still trending higher than the S&P 500 (represented by SPY). 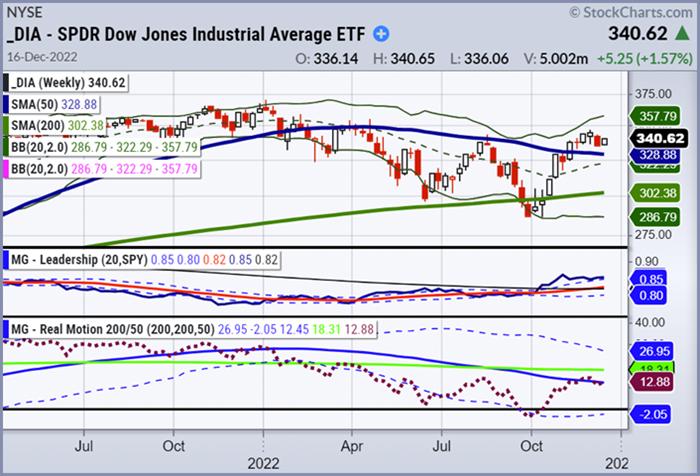 In our Triple Play Leadership Indicator, DIA is displaying clear market dominance. It is trending higher than the S&P 500 Index and showing significant pricing power in a strong breakout compared to the SPY. However, our proprietary Real Motion Indicator above shows that DIA’s upward momentum is slightly weaker than the weekly closing price, so watching the weekly trend will be necessary to interpret the golden cross.

Despite appearances, the “golden cross” is not a sure thing. While the indicator could be a trading opportunity, caution is advised, as no guarantee can be given with the deluge of financial data in the days ahead.

On balance, investors should use multiple indicators to confirm trends and never act based solely on one chart-based signal, like a golden cross. Not all golden crosses proceed to a big rally. So, what does this all mean for investors? The takeaway is that investors should watch the DIA closely in the coming days, especially the weekly closing price. While the index has a lot of upward momentum, some signs suggest caution may still be warranted.

Keep an eye on the Triple Play Leadership Indicator and Real Motion Indicator to better understand where DIA is headed. And as always, follow these indicators to stay ahead of the curve in today’s market.

If you want to take advantage of our proprietary trading indicators, contact Rob Quinn, our Chief Strategy Consultant, who can provide more information about Mish’s Premium Trading Service.

“I grew my money tree and so can you!” – Mish Schneider

Mish discusses trading the Vaneck Vietname ETF ($VNM) in this appearance on Business First AM.

Mish discusses the importance of not adding trading risk into the rest of the year in this appearance on Business First AM.

Mish talks stagflation in her interview by Dale Pinkert during the F.A.C.E. webinar.

Mish hosted the Monday, November 28 edition of StockCharts TV’s Your Daily Five, where she covered some of the Modern Family. She also discusses the long bonds and gold with levels to clear or, fail.

Mish discusses “Macro & Market Analysis – Winning Trades in All Markets” in this appearance on the podcast The RO Show with Rosanna Prestia.

The VIX Is Screaming to GET IN NOW! And Don’t Miss Our FREE Saturday Event! | Trading Places with Tom Bowley

The SPY Knocks on the Door of Resistance | Don’t Ignore This Chart!