Say what you want, but January has proven to be a very reliable predictor of U.S. stock market action from February through December since 1950 and, with just a little more than a week left to go in January 2023, market action is suggesting that we’re going to have a very strong year. It’s just one more historical fact that suggests higher prices are ahead of us. I’ve also mentioned recently that of the previous 13 bear markets since 1950, excluding the 2022 cyclical bear market, 6 ended during the calendar month of October. If October 2022 proves to be the ultimate low, that’ll make 7 out of 14, 50% of all bear markets. That’s another piece of compelling evidence that the bear market low is IN.

If I step away from historical tendencies, however, and simply look at the S&P 500 chart, the downtrend line since the beginning of 2022 is what nearly every technician is watching:

The downtrend line currently intersects at approximately 4000, depending on how you draw your trend line. In my view, that’s the first critical level to clear in order to confirm the end of the bear market decline. Check out the subtle difference that we’re seeing in January 2023, though. After the last 3 death crosses and bearish PPO centerline crosses, we saw selling accelerate and new lows quickly reached. We’re seeing something entirely different this time. The PPO has turned back above centerline resistance in bullish fashion and we’ve also seen a bullish “golden cross” just a few weeks after the death cross suggested we’d head lower. What’s happening? Well, I can tell you what I think is happening. We’re chopping in preparation for a solid year ahead. Many are waiting for price action to confirm what’s been taking place beneath the surface for months. I told our members and the entire investing public that June 2022 had the characteristics of a major market bottom and that it was time to concentrate on long positions, letting go of the bear mentality that was appropriate during the first six months of 2022. I don’t think I could have been much clearer:

Did we eventually move slightly lower in October? Yes we did. I’m still pretty happy, though, with my signals that suggested shorting the S&P 500 at the beginning of the year and moving to a long position in mid-June 2022. The S&P 500 closed lower than 3636 on 5 separate trading days from September 30th through October 14th. Since my bottom call, the S&P 500 has closed higher on 143 different trading days. I think I’ve been on the right side of the market since June and 2023 will prove that the October 2022 low was THE ultimate bear market low. Waiting for further signals, in my humble opinion, will result in lower returns, but I suppose time will tell. I remain very bullish and said throughout 2022 that the bear market was of a cyclical (short-term) nature.

Another critical technical component that tells me the worst is behind us is that we’re seeing buying with bad news. The October low saw a massive reversing candle after a much-worse-than-expected September CPI inflation report. After a gap lower, buying was intense ALL DAY LONG. Check it out: 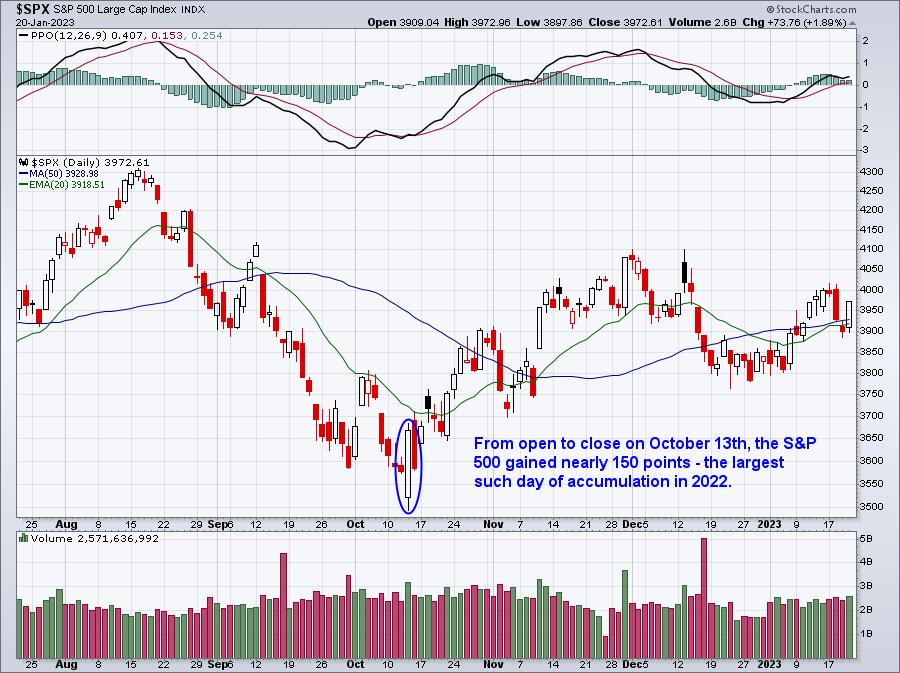 Another very positive development is that after a brutal 4th quarter for many growth stocks, the sun is suddenly shining in 2023. The 10-year treasury yield ($TNX) set a new recent low and this time, growth is performing much better than value. That’s a very important change in market character, because many of these growth stocks have large market cap valuations and can much more easily move our benchmark indices like the S&P 500. Check out the sudden improvement in growth stocks in 2023: 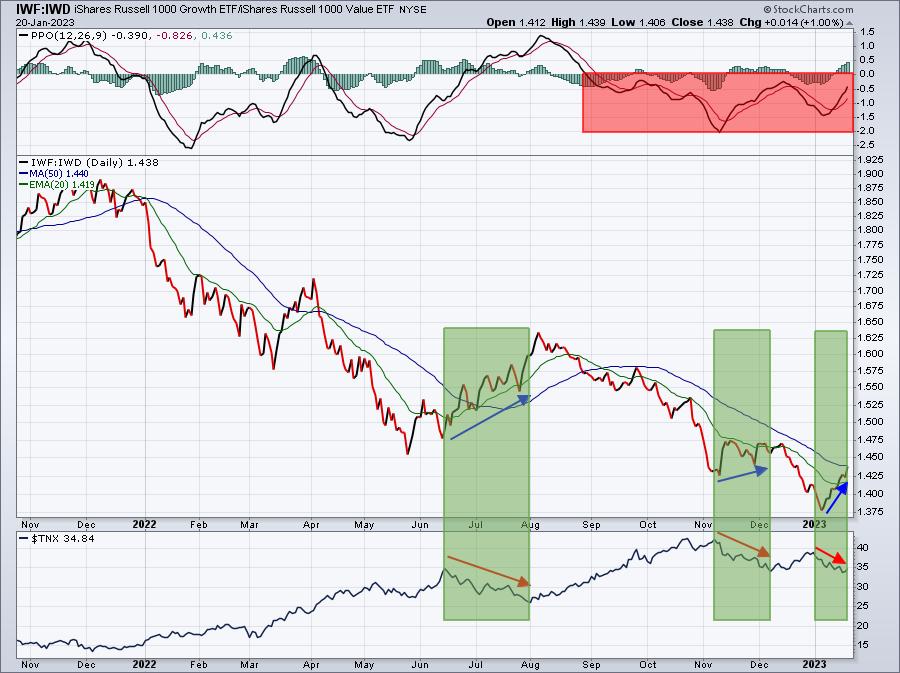 The drop in the TNX in November/December didn’t have quite the same bullish effect on large cap growth stocks (IWF) that the June/July drop had. Growth vs. value (IWF:IWD), however, is moving solidly higher in 2023, clearly benefiting from the lower TNX. I have highlighted in red the months of negative relative momentum that growth stocks have experienced. While things have certainly improved, we haven’t seen any significant confirmation of long-term renewed strength. The bulls still have work to do.

An encouraging part, however, has been key individual stocks’ resilience to bad fundamental news. Take Salesforce.com (CRM) as an example. It downtrended throughout 2022 and was the Dow Jones worst-performing component stock for the year. But then, after announcing 8,000 layoffs, or 10% of its work force, CRM rallied strongly: 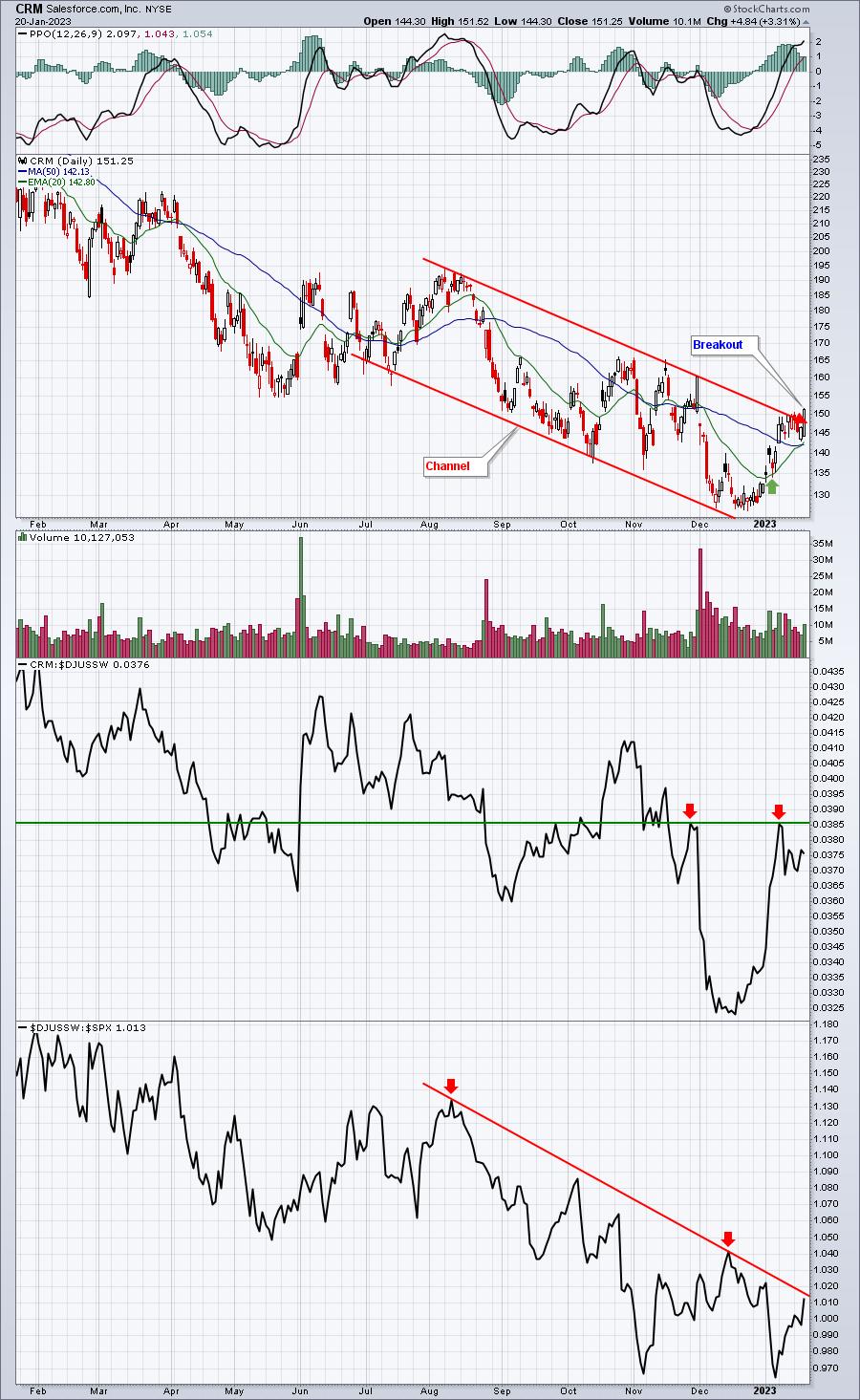 The green arrow highlights the successful 20-day EMA test the day that the layoffs were announced and you can see the subsequent rally. CRM has now broken above its recent downtrend channel and is on the verge of clearing important relative strength resistance vs. its software peers ($DJUSSW).

Last week, at our quarterly “Sneak Preview: Q3 Earnings” event, I highlighted Netflix (NFLX) as one of my favorite companies heading into earnings season. NFLX absolutely loves the month of January and January 2023 has been no exception. Check out this seasonality chart: 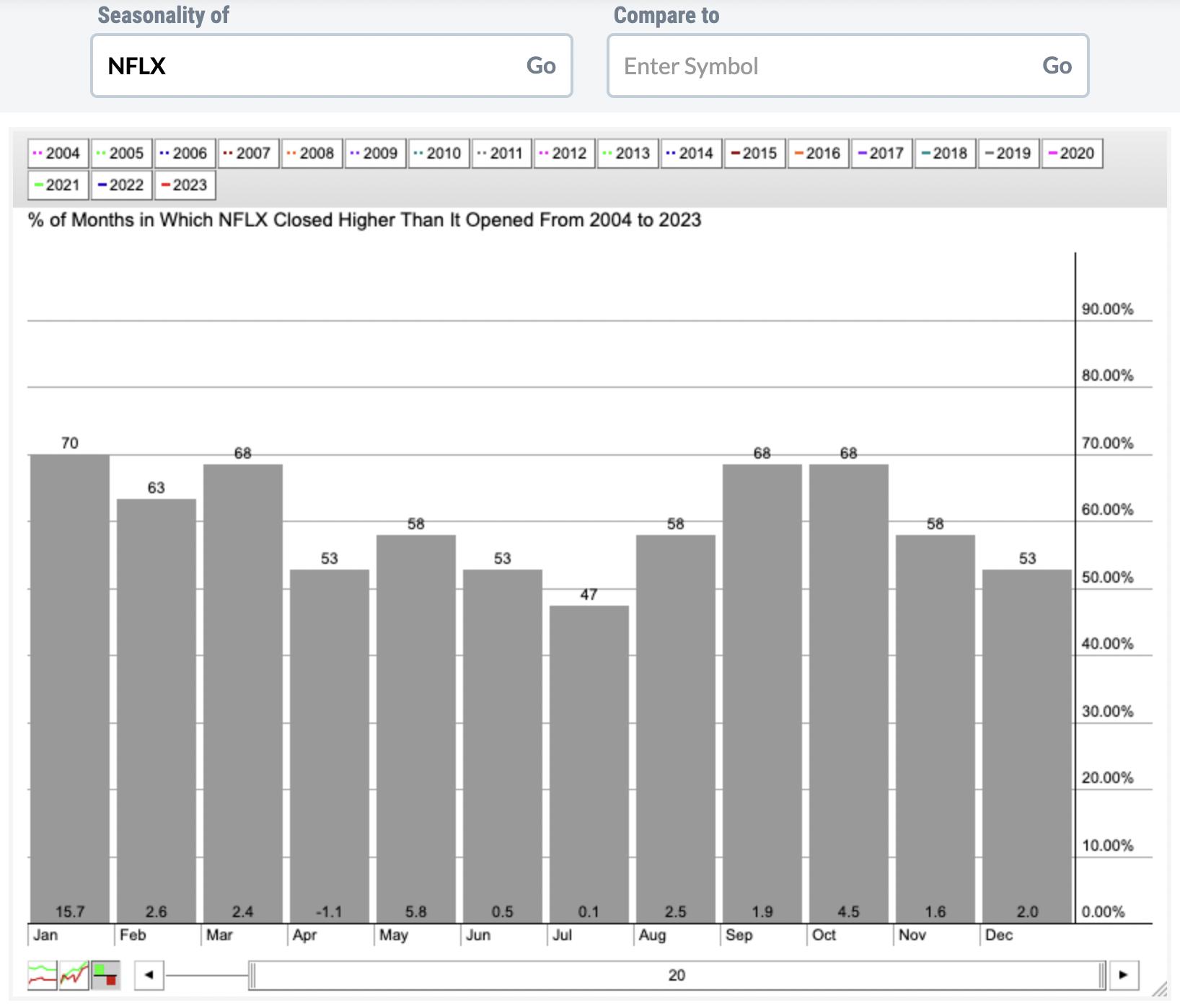 Over the last 20 years, NFLX has averaged gaining 15.7 during the month of January. That’s incredible and is the reason why NFLX was our favorite seasonal stock for January 2023 and passed along to our EB.com members to open the month. Those bullish thoughts proved to be correct as NFLX is currently higher by approximately 17% this month. Quarterly results were reported on Thursday and were solid, as expected.

Tomorrow, I’ll be hosting our “Q4 Earnings” event at 4:30pm ET and I’ll be providing my favorite 10 companies that will report earnings over the next 2-3 weeks as earnings season really heats up. I’ll also disclose the 10 companies that I’d completely avoid heading into earnings. I’ll discuss dozens of other companies reporting quarterly results as well. I use a key technical indicator to evaluate companies prior to their quarterly earnings report and it’s proven to be extremely effective in predicting reported results. If you’d like to join me tomorrow, simply CLICK HERE and sign up for a FREE 30-day trial. You can check out our entire service at no cost for an entire month! I hope to see you tomorrow!

GNG TV: The Birth of a Bull — Volatility Expands to the Upside | GoNoGo Charts